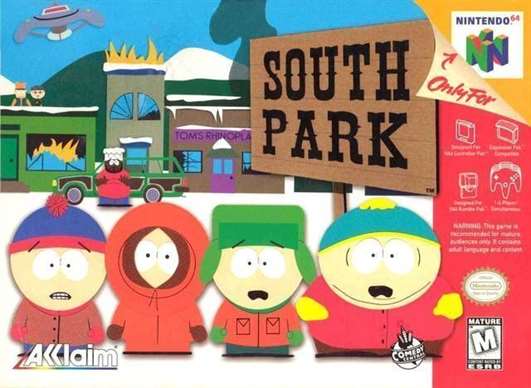 South Park is a first-person shooter adventure video game based on the American animated comedy series of the same name. The game was developed by Iguana Entertainment and published by Acclaim Entertainment for the Nintendo 64 in 1998 for North America and in 1999 for Europe. It was later ported to Microsoft Windows in 1999 and released in North America only. The PlayStation port was developed by Appaloosa Interactive in 1999. A Game Boy Color version was in development, but it was eventually canceled by creators Matt Stone and Trey Parker, feelings the game would not fit in a console marketed towards children. However, they did keep a few copies of the Game Boy Color version to commemorate what was originally started as the first South Park game.[4] Despite the Nintendo 64 version’s positive reception, the PC and PlayStation versions of South Park were panned by critics. A Sega Dreamcast version was planned for a 2000 release, but was cancelled during development for unknown reasons. In 2018, a ROM image of the Game Boy Color version was leaked online.