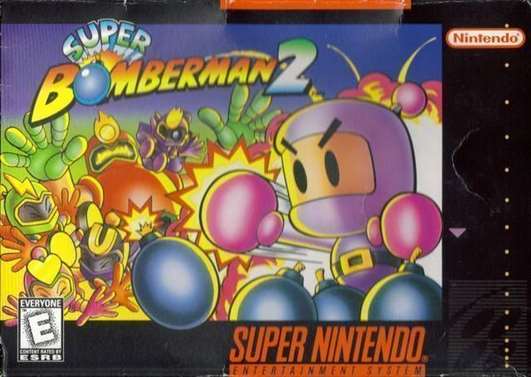 Super Bomberman 2 (スーパーボンバーマン2 Sūpā Bonbāman Tsū) is the second of five games in the Super Bomberman series developed by Produce and Hudson Soft and released on the Super Nintendo. It was released in Japan on April 28, 1994, in North America later the same year, and in Europe on February 23, 1995. It is the only Super Bomberman game without a 2-player story mode, although one was originally planned.[3]

Story
5 evil cyborgs called the Five Dastardly Bombers are bent on taking over the universe. On Earth, they capture the original Bomberman, and he is placed in a prison cell in their space station. He awakens in the dungeon of Magnet Bomber and must fight his way to a final showdown with the Magnet Bomber himself. In the following four worlds, Bomberman will challenge Golem Bomber, Pretty Bomber, Brain Bomber, and their leader, Plasma Bomber, in an effort to free the Earth and himself from these alien invaders.

Gameplay
Story Mode
The story mode consists of walking through maze-like areas filled with blocks, monsters, and switches with a goal of opening the gate leading to the next area. To accomplish this, the player lays bombs to destroy all the monsters and flip all the switches. Destroying blocks in the maze will uncover useful power-ups to increase their bomb count, firepower, speed, and grant them special abilities such as remote control bombs, throwing bombs, and taking an extra hit.

There are 5 worlds total, and at the end of each world is a boss. Each boss is first battled on foot before retreating into a giant machine. After the boss is defeated, the player will move on to the next world.