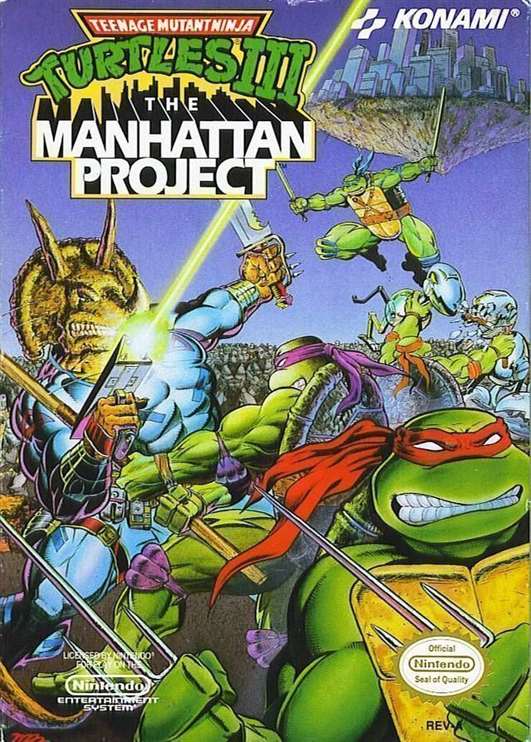 Plot
The game begins with the Turtles spending their vacation in Key West, Florida. While watching April O’Neil’s latest news report, her broadcast is suddenly hijacked by the Turtles’ nemesis, Shredder. Taking April as his hostage, Shredder reveals that he has also turned the entire borough of Manhattan into a floating island and challenges the Turtles to come to his lair to stop him.[2]

Gameplay
Teenage Mutant Ninja Turtles III can be played by up to two players simultaneously, with each player controlling a different character. The player can choose between any of the four turtles: Leonardo, Raphael, Michelangelo and Donatello, each wielding their signature weapon. Two different 2-player modes are featured in the game, the first mode allows both players to hurt each other with their attacks, while the other mode disables this feature.[3] The player has a limited number of lives that gets depleted every time the player’s energy gauge runs out. If one player has run out of lives, they can use the remaining ones from the other player’s remaining stock (this is possible to do in the one-player mode as well). The player is allowed to change their character every time they lose life. Up to three chances to continue are provided.[4][5]

The controls are mostly unchanged from the second NES game, with one attack button and one jump button. The turtles can now perform a toss attack against their enemies by holding the D-pad downwards while pressing B. Each turtle also has a different special attack that is performed by pressing B and A simultaneously. Every time the player performs this attack, a portion of their energy will be lost, unless they are on their last bar of life